Luckin Coffee, the much-hyped Chinese Starbucks challenger, have overtaken Starbucks to become for the “number one coffee chain in China,” according to an announcement from the company. At the end of 2019, the domestic chain had 4,500 locations while the American coffee giant had 4,300.

Founded in 2017, the startup has amassed over 40 million customers — mostly young people — through their digitally-savvy platform. The company has made heavy use of its mobile app and rapid delivery service to gain a foothold in a market that was previously dominated by Starbucks, sometimes leaving the American coffee giant playing catch-up on such initiatives.

And if ordering coffee on your phone and getting it delivered to your doorstep within half an hour wasn’t convenient enough, you can now get your caffeine fix from the unicorn without interacting with anyone at all.

On January 8th, Luckin announced the launch of its Luckin Coffee EXPRESS and Luckin PopMINI “innovations” with great fanfare and talk of “unmanned” services. The launches aren’t quite as groundbreaking as Luckin would like you to believe however — one is a coffee machine and the other a vending machine.

According to CEO Qian Zhiya, these unmanned machines will be found in offices, campuses, airports, gas stations, train stations, service areas, and neighborhoods across China. 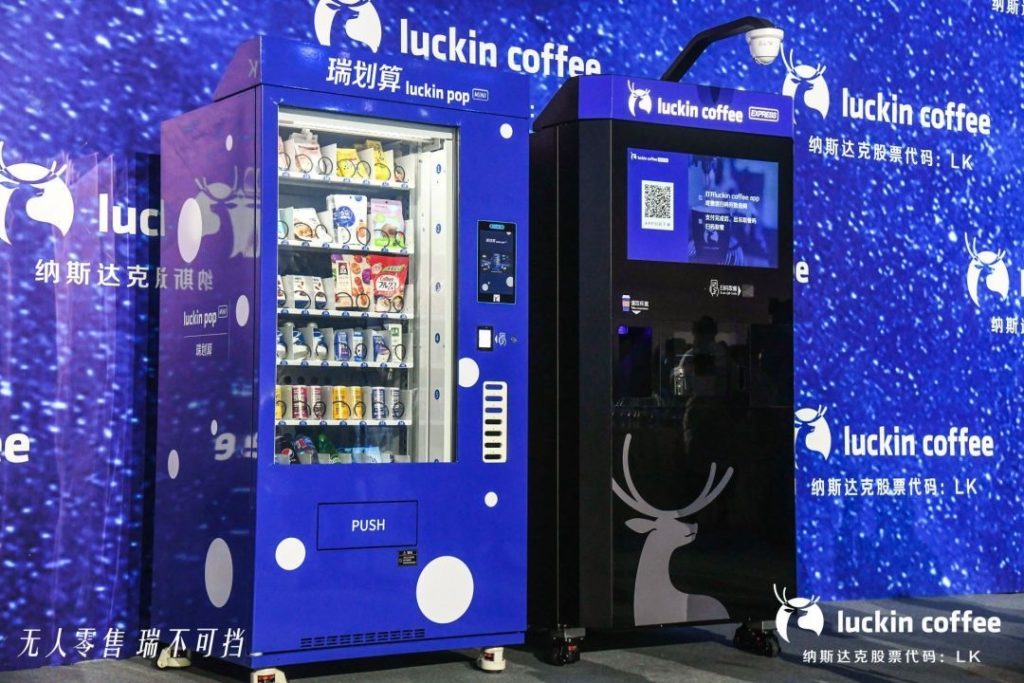 The coffee machines will dispense the same coffee and tea offered at its stores, and be ordered via the mobile app and scanning a QR code to receive your freshly brewed drink. The vending machines will not only be stocked with Luckin-brand and international drinks and snacks, but also use voice and face recognition for payment.

While China still doesn’t consume nearly as much coffee as the US or European countries, coffee consumption is increasing at rates of 15-20% annually, which is much higher than the 2% growth rate of the global market. No wonder then that chains like Luckin are attempting to cash in on China’s newfound coffee craze, even as that comes with great environmental impact.

For more on the story of Luckin Coffee, see our explainer here: