In June 2017, Trump announced that the US would withdraw from the Paris Agreement. After the announcement, media coverage in the US shifted to China’s emerging role in the world, a country that was often referenced in less than congenial terms during Trump’s campaign. Whether the US’s intentions to leave the Paris Treaty had immediate impacts was irrelevant (the earliest possible US withdrawal date is not until November 4, 2020) — it signaled the continued US retreat from larger international policies.

Many protested Trump’s withdrawal. Among them was David Rank, who left his post as acting ambassador to China after 27 years of working in the foreign service. Since his departure from China, Rank has been traveling around the US after many years abroad. His very public Washington Post op-ed has also led to a number of speaking appearances, including one evening that I was lucky enough to attend at the 1990 Institute/UCSF Hastings Law school.

The audience was a motley crew of prominent policy makers, Silicon Valley entrepreneurs and engineers, eager to hear about what Rank saw as the changes unfolding in US-China relations, but also the impact on cross-border trade, investment and business.

During the event, Rank undeniably reveled in his new status as a civilian. He was gracious and thanked the audience for allowing him to serve as a representative of the US abroad for so many years (a sadly antiquated-seeming statement given the current state of representatives across the US actively avoiding town halls).

One member of the audience shared her experience at a large multinational CPA, talking about how investment direction has flipped significantly in the past five years. Instead of US companies looking to go into China, she was seeing a trend of Chinese companies investing in the US, especially in the tech sector.

Rank also lamented the new administration’s isolationist stance in the world, with the US withdrawing from both the Paris Agreement and the Trans-Pacific Partnership (TPP) trade agreement as China has held steadfast in its increasing soft power and investment commitments throughout the world. However, Rank remarked with optimism that we would head, in his opinion, back in the right direction, towards more globalized policies and connections, and perhaps even back towards trade agreements like the TPP.

The TPP and International Flow of Tech IP

Earlier this year, Trump withdrew from the TPP, inked under Obama. The trade agreement was signed by 12 countries including Australia, Japan, and Peru. China was notably not among the TPP countries, an exclusion considered by some to be a way to establish stronger relationships between Asia Pacific countries and the US, while diminishing China’s economic role in the region.

The TPP was criticized as a controversial trade agreement from multiple parts of the US political spectrum. Had the TPP passed, it would have meant greater trade liberalization and expanded rights for corporations on both sides of the Pacific. It was also a relatively secret trade agreement, circulated among lawyers and lobbyists, with only small parts getting leaked to the wider policy establishment.

Notably, the TPP had numerous articles that regulated digital goods in a way that would allow large corporations such as Google, Facebook and Apple to expand unencumbered by user protection legislation into other parts of the world. These articles were focused on protecting intellectual property (IP), but as a result, also allowed new levels of opacity.

While the 2001 WTO agreement stipulated that tech companies from one country would be allowed to expand into other countries, since then countries have adapted specific national regulations on protecting user privacy and how companies share user data across borders.

The TPP allowed digital goods to be exchanged seamlessly from country to country, offering a huge opportunity for US tech companies, where the amount of digital exports is approximately $135 billion dollars. Facebook, Google and Apple were prominent supporters of the TPP, officially releasing a statement as part of the Internet Association.

Rank also discussed climate, China’s new role and his own departure from the foreign service. The US and China are the two largest producers of emissions in the world, so the US departure from the Paris Agreement signaled China’s emergence as a global leader. Signed in December 2015 under the Obama Administration, the Paris Agreement is an “executive agreement rather than a treaty,” as there are no legally binding emissions reduction targets or financial targets.

The Paris Agreement includes a pledge to help fund and assist developing countries in lowering their emissions. Under Obama, the US pledged $3 billion to the Green Climate Fund, and China pledged $3.1 billion to the similar South-South Climate Cooperation Fund. Although the US will no longer participate in the climate fund, China reaffirmed its commitment to combat emissions and fund developing countries to tackle climate change, as well as its commitment to support economic globalization throughout this year.

I caught up with Rank afterwards to get his thoughts on US internet governance in light of his experiences in China, his experiences working in US government (as many are fleeing under the current administration), and his decision to leave the State Department after so many years.

Radii: You mentioned the TPP, of which Facebook was a big supporter. What do you make of tech companies acting more and more like state powers, where you have Mark Zuckerberg performing public diplomacy, making speeches in Mandarin and asking Xi Jinping to name his second child ?

David Rank: I joined the State Department in 1990. It was a very different world. We didn’t have cell phones, we didn’t have email, we barely had CNN. So the world moved more slowly and everything was government to govern with. I was at a conference not long before I resigned — it was the US, India and China discussing long-term strategic issues. Everything on the agenda was something that wasn’t really a traditional state-to-state interaction, things like terrorism or internet governance. So all these things are bigger than the state and nation states, or below the nation state, but in the traditional stuff of diplomacy is just a much smaller slice of how we interact — that’s the way the world is, right? It’s more connected. And I suppose it’s natural that we haven’t figured out how to do it right. You know, is Mark Zuckerberg American? He’s an American citizen but is Facebook an American company? It is, but when they go to France they try and look French as possible.

Our take on internet governance is very, very different from the Chinese take on internet governance, to name an example. And the job that the Chinese state has taken on, of monitoring internet content, we’ve left that to Mark Zuckerberg. And I think that’s the right way to do it. It’s sort of ironic. I worked for the government for 25 years. I don’t think that’s the right place to be making those decisions. If someone’s going to make a bad decision on internet governance, on content and that sort of thing, my hope, my personal view is that there should be a lot of people making that mistake before someone from the government does.

You’ve served in the foreign service in high ranks under several different administrations, Democrat and Republican. What made you decide that Trump leaving the Paris Agreement was the last straw?

David Rank: Part of it is the point in my career. Americans have taken for granted for a long time the benefits we get from leadership. And so we really haven’t developed the muscles of defending or thinking about what it is we get from being leaders. There’s not that much difference in our foreign policy between Democrats and Republicans, and so it made it really easy to not make the case for say, the TPP, to not make the case for why it matters to be engaged in Africa or other parts of the world. I thought of Obama as hope and change, and Trump [as] pitching despair and change. But the common theme was change, pushing for change. And you know, there was no one there who had made the case in favor of engagement. So it was just easier for what has happened to happen.

Since the Trump Administration has taken office, and also as part of a general trend, more and more people my age in the US have decided not to work in government, because it’s too large and too slow. What advice would you give them? Why should they serve their country?

David Rank: You’re asking me probably at the wrong time of my career. You pay a price for working in a big organization. You have to work with a lot more people. But you know, there are some issues that only governments can handle. The State Department is a little unique because there isn’t talk (not yet, anyways) of farming out the basic functions of diplomacy of how states interact with each other.

In some big picture things, I personally think there’s a big role for government on things like education. What that education looks like may be different, but we have decided that at a national level it is both the right thing to do and the proper thing to do. It’s good for the United States to have a well-educated population, but it’s also the right thing to do as as a wealthy country.

I think health and health care is another one of those. It’s a matter of discussion. My personal view is not that the government needs to be providing health care, but [it needs to be] ensuring that ordinary Americans have health care they need. It’s not only a nice thing to do for people, it’s also good for the country. It’s good that people can take a job because it’s something they’re interested in rather than taking a job because it offers benefits. And I think that that allows a more creative, productive private sector. Know what is it governments are capable of doing, and there’s lots of stuff that that can and should be done. 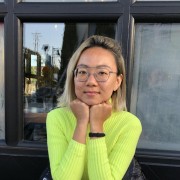